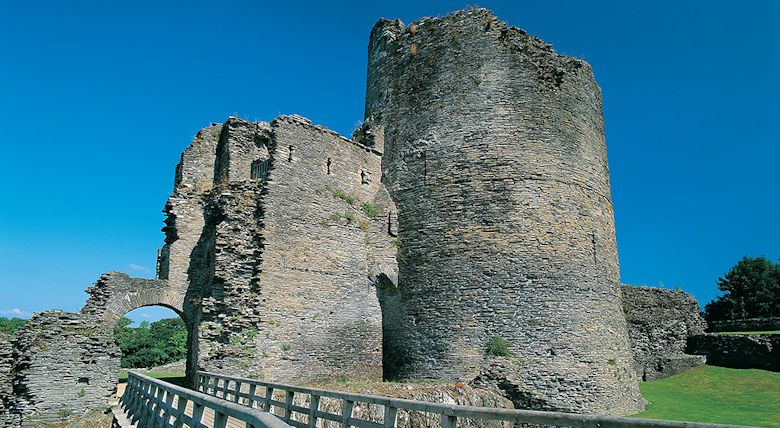 Cilgerran's towers appear amongst woods on the rim of a steep gorge in the Teifi Valley. The timeworn, beautifully located castle has a romantic air - it is somehow fitting that Cilgerran is forever associated with the abduction in 1109 of Nest, the Welsh 'Helen of Troy', by a besotted Owain, son of the Prince of Powys, an act which set all Wales aflame.

The castle as it now stands dates from a century later, when the powerful Norman baron William Marshall the Younger set about rebuilding it following a troubled period of capture and recapture from the Welsh in this hotly disputed area.

Cilgerran's most striking surviving features are Marshall's powerful twin round towers and curtain wall, built to defend the castles vulnerable side (note how the towers' outward-facing walls are much thicker than those within).

Yet Marshall's efforts bore little fruit, for the castle was apparently derelict within 50 years. Its fortunes revived in 1377 when Edward III ordered repairs to counter a threatened French invasion, and it was in the wars again during the Owain Glyn Dwr uprising in the early 1400's.

Cilgerran's history and setting have long stirred the imagination. It has inspired artists for centuries and was one of Wales's first tourist attractions, much favoured by Victorian visitors who arrived by boat from Cardigan.